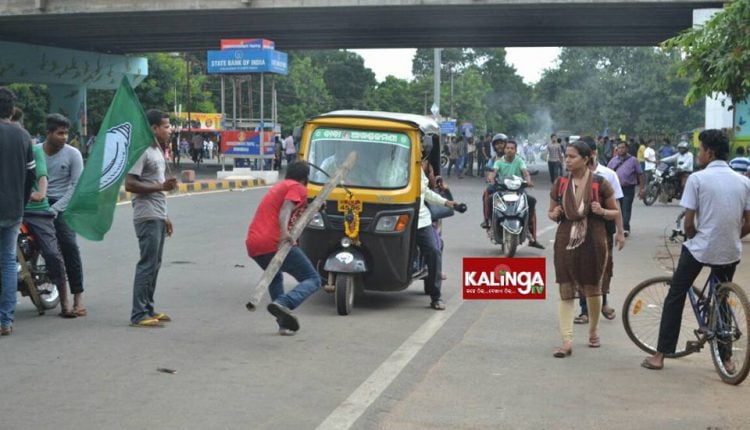 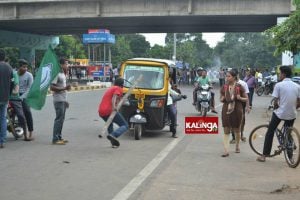 Bhubaneswar: The five-hour ‘Hak Pain Hartal’ (fight for right) organised by the ruling Biju Janata Dal ( BJD) against the steep hike in fuel prices in the recent past has paralysed life in most places in Odisha. While vehicular movement came to a standstill at most places in the state, the impact of the strike was particularly severe in Bhubaneswar, Cuttack, Berhampur, Jeypore , Balasore and Bolangir.

The hartal started at 7 am today at all blocks and district headquarters across Odisha and continued till 12 noon.

The BJD activists were seen picketing at important places in the capital city. They did not allow any vehicular movement, not even two-wheelers, in the city. However, they allowed ambulances to reach their destinations.

Commuters faced problems all over the state as auto rickshaws and taxis went off roads. BJD activists blocked state and national highways at various places in the state causing inconvenience to travellers.

“I am working in a private company. I have to reach my office in time as I have an important assignment today. But, these people are not allowing even two-wheelers’. It is really a panic for me and my colleagues,” said an office goer here.

Rail services have also been affected in many parts of the state. BJD activists staged the hartal with “Rail Roko” in major railway stations including Bhubaneswar, Cuttack, Berhampur, Balasore , Rayagada and others.

School, colleges were shut as the State government had issued an advisory to all schools and colleges across the state to shut down for the day.

Former Ministers Devi Prasad Mishra and  Sanjay Das Burma, along with hundreds of BJD activists were, taken to police custody during the hartal.