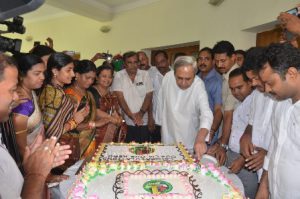 Bhubaneswar: Chief Minister Naveen Patnaik, who won the Outlook Speakout ‘Best Administrator’ Award on Friday, celebrated his success with more than 20 organizations by cutting a cake, possibly for the first time in the presence of a huge gathering at his residence Naveen Nivas here on Monday.

Hundreds of members of more than 20 organizations, including corporators and transgenders, met Patnaik and greeted him with bouquets and huge flower garlands.

The Chief Minister also took selfies with many visitors.

“It was a proud moment for every Odia as their Chief Minister has been conferred with the Best Administrator Award in the country. It is the result of honourable CM’s dedication and hard work for the development of the state. We hope he will continue to do so,” said Bhubaneswar Mayor Ananta Narayan Jena.

Patnaik also received congratulatory greetings from the employees of the state secretariat and members of Odisha Amala Sangha.

The union of the secretaries, led by Chief Secretary AP Padhi, also conveyed their greetings to Naveen at the conference hall of the state secretariat.

Thousands of BJD workers, along with Ministers, MPs, MLAs and leaders, had cordially welcomed Patnaik on his return to the state from Delhi yesterday. Many more organisations are also expected to greet him.

Former President Pranab Mukherjee presented the Best Administrator Award to the Odisha CM at the Outlook Speakout Awards after he scored more votes than his competitors.