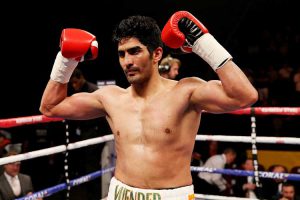 In the pro boxing bout, billed as ‘Battleground Asia’, in Mumbai on Saturday evening, Vijender recorded a unanimous decision win over his Chinese opponent and continued his undefeated streak.

Vijender started off cautiously in the first couple of rounds but soon picked up momentum by landing a couple of heavy blows.

It was the Beijing Olympic bronze medallist’s ninth successive win in his professional career. Vijender gave an exhibition of his class during the slug fest and his experience came in handy during 10 intense rounds.