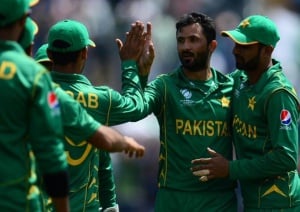 Cardiff: After a lacklustre performance against India in the first game, Pakistan team were dubbed as one of the weakest team in the recent times. But, they proved all critics as well as cricket pundits wrong by winning three matches in a row and booking a berth in the finale.

Pakistan had no difficulty to overcome the challenge from mighty England, which remained unbeaten in the tournament till date. The eight-wicket win showed how ruthless Pakistanis were in today’s semifinal.

Hasan Ali was declared ‘Player of the Match’. Pakistan will take. The winner of tomorrow’s second semifinal between India and Bangladesh.