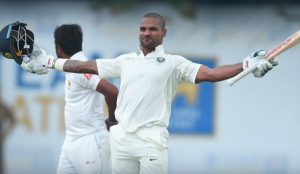 Kandy: India ended the first day at 329 for 6 at stumps on the first day of the third and final Cricket Test against Sri Lanka here on Saturday. Wridhiman Saha and Hardik Pandya were at crease with 13 and 1 respectively when stumps were drawn for the day.

Earlier, Indian captain Virat Kohli won the toss and decided to bat first. Opener Shikhar Dhawan smashed his sixth Test hundred, while K L Rahul made a superb 85. The openers put up a good platform with a 188-run opening stand, but the middle order didn’t capitalize on it. Skipper Kohli contributed 42 runs.

For Sri Lanka, Pushpakumara scalped 3 wickets, while Sandakan took 2 wickets and Fernando one.

The visitors, currently leading the series 2-0, are aiming for the first ever whitewash in the island nation.