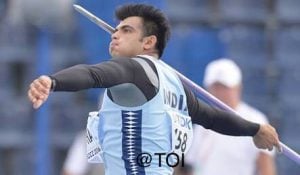 Bhubaneswar: Javelin Thrower Neeraj Chopra, who set the U-20 world record by throwing a Javelin to a distance of 86.48 metres last year, says the Asian Athletics Championships will be a precursor before the all-important World Championships in London later this year.

“Asian Athletics is crucial as it will set the tone for the World Championships. This place is lovely and I will give my best shot,” says the Javelin Thrower, who will compete tomorrow.

Neeraj was felicitated at the Kalinga Stadium today by the President and General Secretary of Athletics Federation of India (AFI).

“I have been consistently hovering around the 84-85 mark, which is a good sign. For my event tomorrow, I will try to finish around the same length,” he says.