India Opt To Bowl Against Australia In 2nd T20I 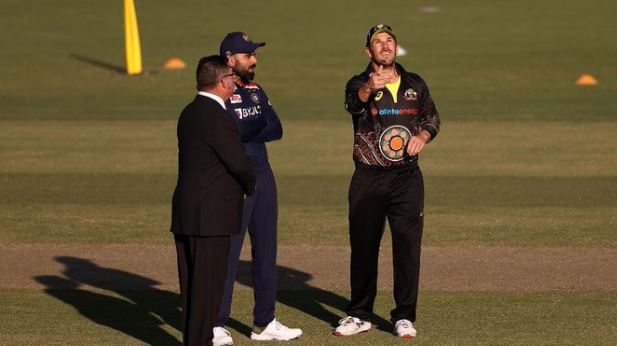 Sydney: India skipper Virat Kohli on Sunday won the toss and elected to bowl against Australia in the second T20I of the ongoing three-match series at the Sydney Cricket Ground.

India have made three changes to the playing XI which last featured in Canberra. Ravindra Jadeja, Mohammed Shami and Manish Pandey have been replaced by Yuzvendra Chahal, Shardul Thakul and Shreyas Iyer.

“We will bowl first. The pitch looks really nice. They (Australia) are missing Aaron Finch today, so we want to restrict them and chase it down. Chahal replaces Jadeja. Thakur replaces Shami and Iyer comes in for Pandey,” Kohli said.

Australia have also made a bulk of changes. Regular skipper Aaron Finch, Josh Hazlewood and Mitchell Starc miss out and have been replaced by Marcus Stoinis, Daniel Sams and Andrew Tye in the playing XI.

India hold a 1-0 lead in the series, having won the first T20I by 11 runs at the Manuka Oval on December 4.