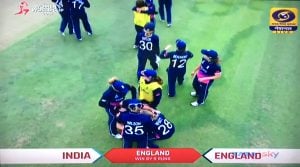 London: The Indian Women faltered at the last hurdle at Lord’s when they lost to hosts England by 9 runs in the ICC Women’s World Cup. But, they made the country proud by fighting till the end and almost making it before losing the nerves.

India’s previous best performance in Women’s World Cup was in 2005, when they lost to Australia in the final to finish runners-up.

The clinical performance by Team India through out the tournament made them near invincible in the tournament barring one game when they lost to South African Women.

Chasing a victory target of 229, India lost Smriti Mandhana for a duck. Skipper Mithali Raj did not last long either. However, Punam Raut and Harmanpreet Kaur batted sensibly to consolidated the innings.

Harmanpreet Kaur scored 51, while Punam Raut was dismissed for 86. Another batswoman Veda Krishnamurthy batted well, but was out for 35. That was the end of the story.

Indian Women bowled out for 219 in 48.4 overs. At one stage, they were 191/3. For England, Anya Shrubsole took 6 wickets, while Alex Hartley took 2 wickets. Anya was declared ‘Player of the Match’.