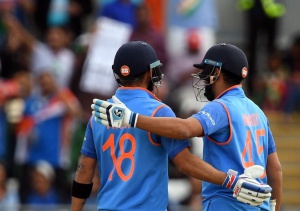 Birmingham: As expected, Team India registered an emphatic 9-wicket win over Bangladesh to set up the finale clash with Pakistan on Super Sunday at the ICC Championship Trophy 2017. This is the 4th time India made it to Champions Trophy final.

Indian openers started on a positive note, as Rohit and Dhawan added 87 runs for the first wicket. Dhawan scored 46 from 34 balls.

Rohit Dharma was declared ‘Player of the Match’. Kohli completed 8,000 runs in ODI cricket. He became the fastest person and played lowest number of innings (175) to achieve the milestone. India will take on Pakistan in the final on Sunday.