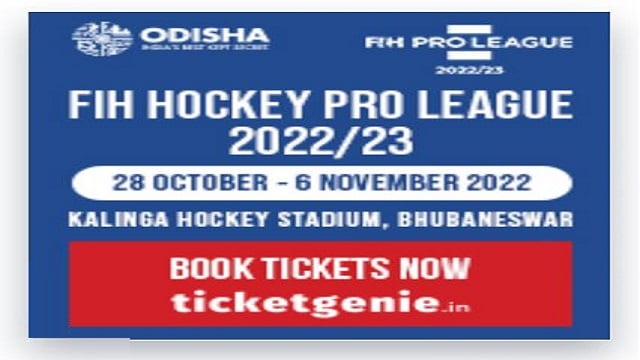 Bhubaneswar: FIH Hockey Pro League 2022-23 in Odisha will begin from October 28. India will open the match against New Zealand on the first day. The ticket selling have been started for the matches that are to be played in Kalinga Stadium in Bhubaneswar.

According to Hockey India website, Padmashri Dr Dilip Tirkey, President, Hockey India stated that , “We are absolutely delighted to welcome all the hockey fans to watch the FIH Hockey Pro League 2022-2023 matches which will be held in the Kalinga Hockey Stadium. With covid-19 restrictions being lifted, we are expecting full-capacity as hockey fans have missed watching live action. These matches against Spain and New Zealand will serve as a precursor to the upcoming FIH Odisha Hockey Men’s World Cup Bhubaneswar-Rourkela 2023 and we look forward to welcoming the visiting teams.”

The New Zealand and the Spain Hockey team have arrived Bhubaneswar for the matches.

India will play against Spain on October 30. Live telecast of all the matches will be on Star Sports 1 and Star Sports 2.