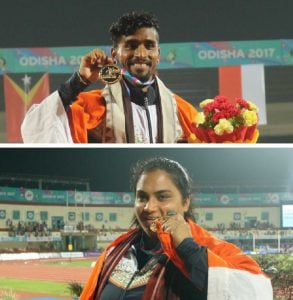 Bhubaneswar: The Indian Athletes began their AAC 2017 campaign on an aggressive note on Day 1 by wii big two Gold, one Silver and 4 Bronze medals.

India earned its second gold medal when Govindan Lakshmanan won the Men’s 5000m with 14 minutes 54.48 seconds. It was completely an one-sided event with Lakshmanan leaving his rivals way behind.

India now tops the medal tally, while China is at No. 2 with 1 gold and 2 silver medals.