Bride asks groom to sign agreement on court paper not to do these things after marriage, video goes viral 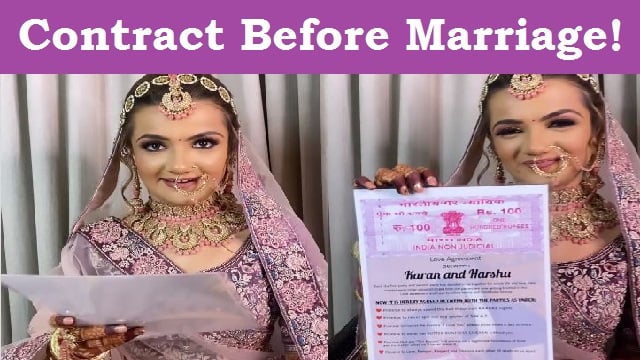 Marriage is an important part of an individual’s life. All most everyone wants to make their marriage to be different from others. They take all possible steps to make their wedding a memorable one. They try to capture every single moment of their marriage on the cameras to treasure it for the rest of their lives. Several such wedding videos are also going viral on the internet.

An Instagram user has shared a short video of a bride on her Instagram page- makeupbybhumikasaj- with the caption ‘Have you ever heard of such contract based marriages.’

In the video, it can be seen that the bride is holding a big envelope on which it is written ‘confidential.’ When she is asked what she has kept inside the envelope, she is saying that she has kept a contract paper for her groom, which he has to sign before the marriage.

In the contract paper, which has been titled ‘love agreement between Kran and Harshu,’ she has asked the groom (whose name is Karan) to do the following things after their marriage.