Success story of an organic farmer from Balangir

The yield from organic farming is of high quality and far better than that obtained from using chemical pesticide and fertiliser: Gangadhar Senapati, Farmer, Bolangir Once Niti Aayog CEO, Amitabh Kant had said India cannot achieve 9-10 percent GDP growth without a revolution in the farming sector. Many farmers are inspired with his words and started their career in farming but Gangadhar Senapati of Bhainsapali in Bolangir district of Odisha neither knows about Niti Aayog nor its CEO, but the born-farmer is working hard to get his livelihood from rice farming with the help of Reliance Foundation Information Service (RFIS). The organic farmer believes that the yields from organic farming are of high quality and far better than that obtained from using chemical pesticide and fertilizer.

The young farmer, who is also raising goats, said, “I am into farming for the last 15-years. I inherited the skills and learned them from my father but the procedures and technology in farming are changing frequently. Although I gained experience from my father it was really tough to make a profit in the business with that knowledge and skill. But, RFIS helped me a lot to get success in this field.” 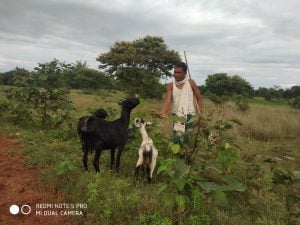 “We have an agricultural land of 5 acres on which my father used to grow crops. As I grew up, I took over the business, but the initial days were tough. I had to bear heavy crop loss due to adverse weather conditions and pest attack. I tried to get solutions from the nearest government help center that is 25 km from my place. As it was not always possible to get in touch with the officials through phone, I had to travel every time I need guidance. But, even their advice did not yield any good result for my crops,” he said.

“I came in contact with the RFIS toll-free number while reading a local newspaper and instantly I called. As I shared my problems and difficulties, not only I got solutions from the experts, but also personal assistance. Success is not a dream since then,” the young farmer said.

The proud farmer practices organic farming and strongly denounces the use of chemical pesticides and fertilizers. He is well-convinced that organic farming increases soil fertility by feeding the soil with micronutrients gained from compost, plant residues, and food wastes. 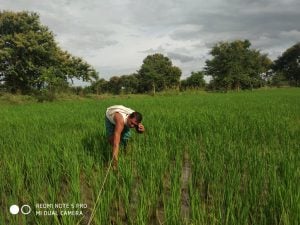 The yield from organic farming is of high quality and far better than that obtained from using chemical pesticide and fertilizer. While it is unexpected to hear such things from a farmer belonging to a very backward region, Senapati gave all credit of his rich knowledge on organic farming to the RFIS.

From his farming activities, Gangadhar meets all his family expenses and has constructed a beautiful house of his own. He shares his art of success among his co-villagers.