Raja celebrates femininity, but Women continue to be shamed 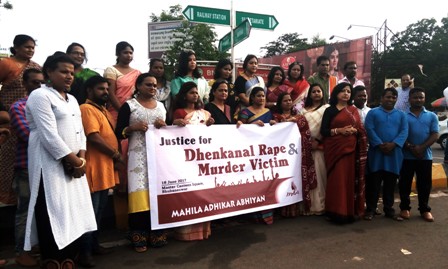 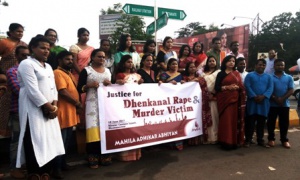 Bhubaneswar: On June 13, Odisha woke up to the news of rape and brutal murder of a widow in Balikuma village near Kankadahada in Dhenkanal district. The incident brought back the horrific recollection of the 2012 Nirbhaya rape case, where similar to the Dhenkanal incident, the attackers had inserted iron rods into her private parts.

Ironically, the rape and murder of the widow comes a day before the State celebrated Raja Parba, perhaps the only festival which celebrates womanhood.

On Friday, a group of civil society members under the banner of Mahila Adhikar Abhiyan, gathered in Bhubaneswar’s Master Canteen area, to observe a silent protest and express solidarity with the victim.

“We are simply standing with a banner and making no noise as we expect the passersby to remember how we have failed our women again. As people are celebrating Raja, we want them to know the women have been shamed again. Enough has been said, now we silently want the society to realize,” said Namrata Chhadha, social activist.

People cutting across sections of the society participated in the protest. While there was social activist Linkan Subudhi, transgender Meera also joined the march. From political front, BJP’s Lekhashree Samantasinghar stood with the group.

“I stand here as a woman today. I strongly condemn the rape and murder of the widow. It is highly shocking. As a society, we have failed to protect our women.”

The group which also had male members, stood firm for an hour, quietly sending out a message.