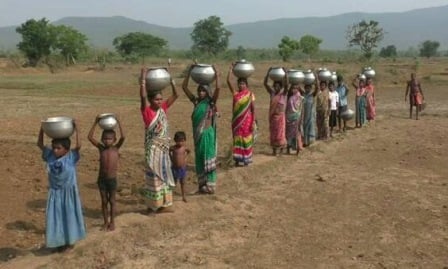 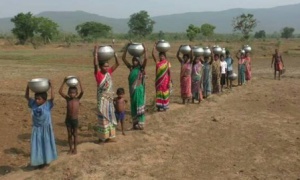 Scenes of women trekking long distances under a scorching sun to fetch drinking water are routine in villages across Odisha during summer. But when they have to do the same because of political vendetta, it is time to sit up and take notice.

Women in tribal dominated Bhagua village in Gabara Panchayat under Athagarh block in Cuttack district have to walk more than four kilometres braving temperatures upwards of 40 degrees Celsius allegedly because the local sarpanch refused to pay any heed to their request to get the defunct tube well, the only one in the village, repaired since they did not vote for him in the last panchayat election.

With the sarpanch turning a deaf ear to their problem, the people of the village then approached everyone from officials of the district administration to the local MLA, but to no avail.

With no relief in sight, the people of Bhagua village now have no choice but to walk to a polluted stream four kilometres away to meet their drinking water needs, exposing themselves to the risk of a host of water borne diseases in the process.

With reports from Santosh Barik