Srinagar: Heavy snowfall over the past 36 hours has caused massive damage to apple trees as life was thrown out of gear in the Kashmir Valley for the second day on Friday.

The valley remained cut off from the rest of the country since Thursday as both surface and air traffic remained suspended due to snowfall.

The Srinagar-Jammu and Srinagar-Leh highways have been closed for traffic as all flights to and from the Srinagar international airport were also cancelled yesterday.

Till last reports came in, flight operations from the Srinagar airport were yet to be restored. Traffic department officials said Srinagar-Jammu highway will remained closed on Friday as snow clearing operations are underway.

Reports from Baramulla, Kupwara and Shopian, Kulgam, Pulwama and Anantnag districts said foliage laden apple trees have extensively been damaged in these districts.

In the higher reaches of Shopian district, the damage to apple trees has been more severe as the fruit was still on the trees when snowfall hit the orchards on Thursday. 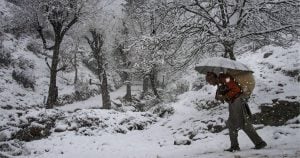 Officials have admitted that most apple orchards in the valley have suffered damage because of the heavy snowfall during the last two days.

While officials did not quantify the damage caused to the apple orchards in the valley, people of the affected areas said that 60 per cent of the apple trees have been damaged due to the early snow. In most of these places, the trees have been flattened to the ground under the weight of the heavy fall.

Horticulture is the biggest industry in Kashmir as nearly 22 lakh metric tonnes of apple are exported from the valley.

Due to the massive damage caused to the transmission lines in Srinagar city and elsewhere in the valley, electric supply has remained cut off in most places during the last 36 hours. 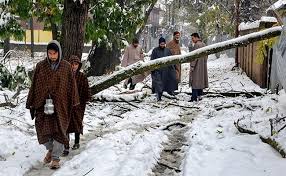 Officials of the electricity department said restoration work is in progress and since the snowfall has stopped, they are hopeful that the systems would be in place within the next 48 hours.

An official of the electric department died yesterday when transmission lines were being restored in Srinagar on Thursday.

Electric supply to essential services is, however, being maintained in the city.

Road connectivity has remained adversely affected in Srinagar and other districts as authorities did not move out snow clearing machines during the heavy snowfall in most places of the valley.

Locals carrying patients to hospitals had a tough time as slippery roads and traffic jams blocked most link roads in the rural areas.

The Meteorological Department has forecast dry weather in the valley during the next four or five days as, instead of depending on the authorities to bring relief into their lives, Kashmiris are looking at the heavens to come to their rescue.