The Nepal government has announced a national mourning on Monday over a plane crash in Nepal's Kaski district that claimed 35 lives. 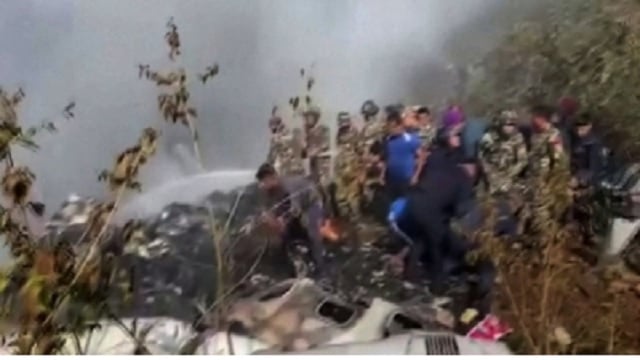 Kathmandu:  The Nepal government has announced a national mourning on Monday over a plane crash in Nepal’s Kaski district that claimed 35 lives.

The Cabinet has announced a public holiday on Monday to mourn the national tragedy, Deputy Prime Minister Bishnu Poudel said.

Rescuers have so far pulled out 35 bodies from a Yeti Airlines crash site in Pokhara.

The government has also formed a five-member team to investigate the plane crash, in which most of the passengers are presumed dead.

An ATR 72 aircraft of Yeti Airlines with a call sign 9N-ANC that took off to Pokhara from Kathmandu at 10.32 a.m. crashed at Nayagaun of the city this morning.

The ill-fated plane caught fire while it was about to land at newly-built Pokhara airport built with Chinese assistance.

Assistant Sub-Inspector of Police Rudra Thapa confirmed with the Kathmandu Post that 25 bodies have been taken to different hospitals in Pokhara for post-mortem. Thapa said the police came to know about the crash at around 11 a.m.

The aircraft contacted the control tower at 10.50 a.m. before it went off the radar.

A total of 68 passengers and four crew members were on board the aircraft that crashed between the old airport and the Pokhara International Airport, Sudarshan Bartaula, spokesperson of Yeti Airlines, said.

Among the passengers are three infants, three children and 62 adults. According to the Civil Aviation Authority of Nepal, the passengers included 53 Nepalis, five Indians, four Russians, one Irish, one Australian, one Argentinian, two Koreans and one French. Two helicopters were deployed from Pokhara airport while additional choppers are on standby in Kathmandu, CAAN said in a press release.

Following the crash, the Pokhara International Airport has been closed for today for all inbound and outbound flights, Teknath Sitaula, Spokesperson for Pokhara airport told Rastriya Samachar Samiti.

The details of the crash awaited. Security personnel along with locals are carrying out rescue operations at the crash site. Images and videos posted on social media platforms showed plumes of smoke billowing from the crash site.