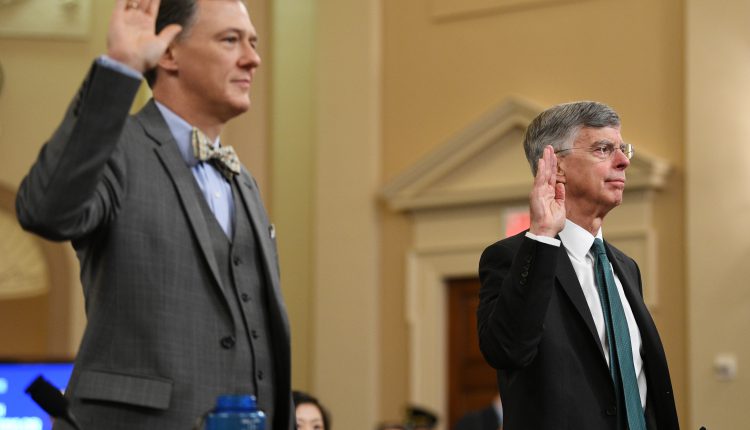 New York: Millions of Americans tuned in to the first day of the public phase impeachment inquiry against US President Donald Trump as at least half a dozen of America’s news television networks and hundreds of livestream conduits delivered more than six hours of ad free reality content and the first two-star witnesses delivered new and damning evidence about a straight line tying the White House to personal political favours from a vulnerable foreign ally.

Those who weren’t watching actively were never far away from the action. Around the world and in America, politics obsessors and skimmers alike soaked up on-demand coverage of the impeachment hearings in ways that were impossible 20 years ago during the Bill Clinton impeachment hearings.

By 2018, at least 36 million households in the US did not subscribe to pay television and the number of cord cutters is growing, according to latest market research data reviewed by IANS.

Despite the explosion of alternative content sources, the business of moving public opinion is going to be a whole new game this time.

Many long days of such testimonies will follow and Democrats are hoping they can wring the last drop from these hearings to weave a tale of greed, intrigue and Trump’s obsession with personal gain over national interest.

Going by the chatter circulating on free digital content platforms, especially Twitter and Slack, it seemed like Americans are only hard coding their partisan voting positions even further. Nothing that was said today by seemed to be piercing through political gridlock, even as spin and conspiracy theories circulate at breakneck speed.

“There was not even the slightest hint that any Republican is taking the evidence that they were given and reconsidering,” Fox News Channel’s Chris Wallace said at the end of the hearings.

“Part of me is wondering, what do facts matter anymore in these debates?” ABC’s George Stephanopoulos said.

A split screen visual shared by a Twitter user showing the text boxes used by the pro-Trump Fox News versus MSNBC sums up the mood.

The MSNBC screen grab’s three bullet points that said: “Top US diplomat in Ukraine since June”; “Testified he had ‘clear understanding’ aid tied to probes”; “Texted it would be ‘crazy’ to withhold Ukraine military aid”.

During the Richard Nixon impeachment hearings, there were all of three television networks and no cable TV. The three worked out a rotation pool amongst themselves. During the Clinton era, there was cable television and radio but internet penetration wasn’t available at scale yet.

The Trump impeachment inquiry is the first one in the age of self publishing and brings with it unique challenges for the Trump opposition.

Taylor and George Kent, two career diplomats with decades of service between them, provided (their) unfiltered and uninterrupted versions of how the US president conditioned military aid to Ukraine on that country’s bending to his demand of investigating a political rival.

Taylor, a West Point graduate and Vietnam veteran with a salt and pepper mop and wire rimmed glasses, delivered a testimony even Republicans will find hard to twist.

“I am not here to take one side or the other,” he said. “My sole purpose is to provide facts as I know them.”

He went on to describe the circumstances surrounding his appointment to the post of acting Ambassador to Ukraine this summer. There, “as summer turned to fall”, he found two distinct channels of American policy toward Ukraine, he said that the “regular channel” which contained his co-witness Kent and officials at the National Security Council, and the “irregular” channel, which included Rudy Giuliani, President Trump’s lawyer; Mick Mulvaney, the acting White House chief of staff; and others.

Taylor revealed how, through this “irregular” channel, millions of dollars in security assistance and the dangling carrot of a White House visit were used to pressure Ukraine to provide Trump with political gunpowder against Joe Biden.

The wall to wall coverage combined stunning testimony and mass education of a vast audience which may have had varying levels of knowledge about the intricate detailing of US military co-operation with foreign countries and the reasons for helping a country on the borders of Russia, half way across the world.

Republicans did everything they could to smear and throw the witnesses under the bus. The Trump resistance set up the fundamental question the way they always have: That a bank robbery did not finally happen doesn’t mean there’s no crime.

At its soul, the impeachment inquiry stems from Trump’s July 25 phone call when he asked Ukraine’s newly elected president, Volodymyr Zelenskiy, for “a favour”. Trump wanted Ukraine to investigate his potential 2020 rival, Biden while he withheld military aid to Ukraine which is fighting off aggression by Russia.

Both sides tried hard to scrunch their messages into snackable soundbites. The lines that stuck, ironically enough, came straight from the Trump playbook. Taylor describing the Ukraine pressure campaign as “crazy”, talking about a “sinking feeling”, “nightmare” scenario and “irregular channels” that ran the White House dirty tricks department.

The witnesses set up the clash as one between honour and patriotism on one side and wheeler dealers on the other side.

“When a businessman is about to sign a check to someone who owes him something, the businessman asks that person to pay up before signing the check,” the irregular channels tried explaining to Taylor.

Taylor’s response: “The Ukrainians don’t owe us anything.”