India offers US$ 100 million line of credit to Benin 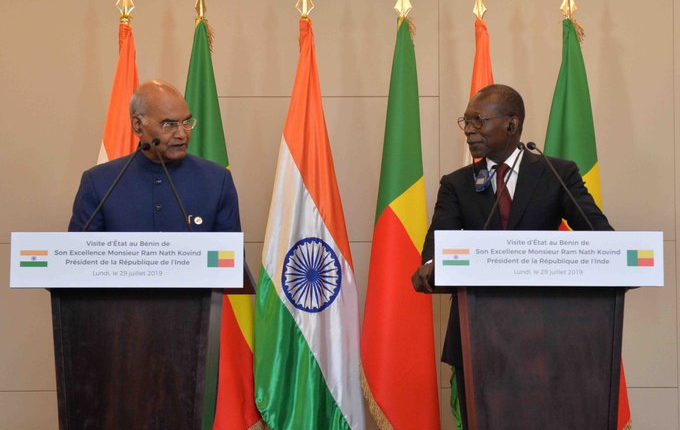 Cotonou: India offered a USD 100 million line of credit to Benin for its development projects on Monday as President Ram Nath Kovind held wide-ranging discussions with his Beninese counterpart Patrice Talon on issues of trade, defence and security cooperation.

The two Presidents witnessed the signing and exchange of MOUs/agreements on  Cultural Exchange Programme between the two countries for the years 2019-2023 as well as Cooperation in the field of Export Credit and Investment Insurance.

India offered a fresh Line of Credit of US$ 100 million to Benin for its development projects.

The President was happy to note that implementation of the US$ 42.6 million Line of Credit for upgradation of water supply schemes in 103 villages in Benin, is proceeding well. pic.twitter.com/Qpy7XsggR0

Two more MoUs are signed on tele education program e-vidyabharati and Tele medicine initiative e-Arogyabharati. Under these programmes, India is extending free tele-education courses to 15,000 students and telemedicine courses to 1000 doctors and paramedics in Africa.

Benin also extended its support for India’s candidature for permanent membership of UN Security Council. In addition, both countries also discussed defence and security cooperation. Later, the President will address the national assembly of Benin in Porto Novo.