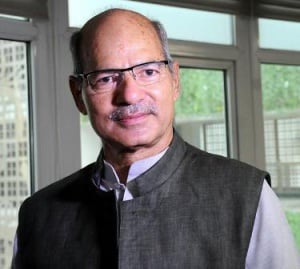 Union Environment Minister Anil Madhav Dave died at the age of 60 on Thursday. According to Wikipedia, he was suffering from lung cancer.

Prime Minister Narendra Modi took to Twitter to express his deep grief over the untimely demise of Dave, stating it as a personal loss.

“Absolutely shocked by the sudden demise of my friend & a very respected colleague, Environment Minister Anil Madhav Dave ji. My condolences. Anil Madhav Dave ji will be remembered as a devoted public servant. He was tremendously passionate towards conserving the environment. I was with Anil Madhav Dave ji till late last evening, discussing key policy issues. This demise is a personal loss,” the PM twitted.

Dave represented Madhya Pradesh in the Rajya Sabha since 2009. He was a member of various committees including the Committee on Water Resources and the Consultative Committee for the Ministry of Information and Broadcasting.

Dave was also a member of the Parliamentary Forum on Global Warming and Climate Change from March 2010 to June 2010.