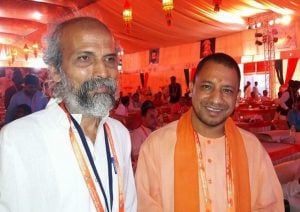 An upbeat BJP after the unprecedented success in panchayat polls and completion of a successful National Executive Meet in Bhubaneswar, is planning to go aggressive with its plan to capture power in Kerala, Odisha and West Bengal. Bengal and Kerala would be too difficult for the party, but it has started sensing victory in Odisha after dethroning Congress as the No. 2 party in the state.

It remains an open secret that Union P&NG Minister Dharmendra Pradhan, has of late, emerged as the front runner in the Chief Ministerial race in Odisha. He has even left his senior colleague and Cabinet Minister Jual Oram way behind. Another aspirant KV Singhdeo may also find it tough to get the nod. However, Dharmendra may still get competition from two leaders – Suresh Pujari and the ‘dark horse’ Pratap Sarangi.

While Suresh Pujari may opt to be active in central politics, as he has been doing for long, Pratap Sarangi is seen as an honest, humble, non-corrupt and grounded leader, who can find acceptability across the political spectrum in Odisha. PM Modi does acknowledge Pratap Sarangi as a selfless leader. While many other leaders were present at the Bhubaneswar Airport to receive him, the PM showed more interest in Pratap Sarangi.

During the National Executive, Pratap Sarangi spent more time with the veteran BJP leaders, including LK Advani and MM Joshi. He also met Uttar Pradesh CM Yogi Adityanath. In the political circle, the meet was seen as ‘A Yogi meets a Sannyasi’.

While BJP boasts of coming to power in 2019, political pundits believe that they are little bit over-enthusiastic and yet to understand the ground reality. The party has a long way to go and should not underestimate Naveen Patnaik, they opine. However, there is a common agreement that BJP would emerge as a challenger to BJD in 2019 and may win around 50 seats in the 147-member Assembly.

Whether the party comes to power in 2019 or later, a major chunk in the BJP as well public bat for Pratap Sarangi as the CM candidate and more role for Dharmendra Pradhan in national politics. PM Modi may need Pradhan more at the Centre, as he has been very effective and aggressive in implementing his schemes across the country. In such an event, Pratap Sarangi could be the obvious choice to take the party forward.