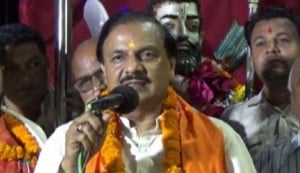 Patnagarh: Union Culture Minister Mahesh Sharma on Friday held a review meeting with the Bolangir district administration in Patnagarh NAC on the development of various pilgrimage sites in  the district, including Ranipur Jharial and Harishankar.

Sharma, after arriving in the town yesterday on a two-day visit, also took part in different programmes organized by the state unit of the saffron party.

The Union Minister attended the ‘Sabka Sath, Sabka Vikas’ programme in Nuapada to mark the completion of three years of the NDA government. He also felicitated women beneficiaries of Pradhan Mantri Ujjwala Yojana (PMUY) at Khariar.

The Union Culture Minister also participated in a Swachh Bharat campaign at Komna.

Sharma is slated to hold a meeting with the party workers in Harishankar today.