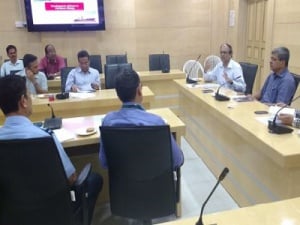 Odisha Chief Secretary AP Padhi on Saturday held a high level meeting with the Defence Secretary G Mohan Kumar at the state Secretariat over the development of Berhampur Stadium.

During the meeting, Sports and Youth Secretary Vishal Kumar Dev informed that the Odisha government had allotted 9.5 acres of land to the NCC earlier in Berhampur. However, it had asked 6 acres of land back for the completion of the Stadium assuring to allot land with equal value.

Besides, it had agreed to provide Rs 2.28 crore for the shifting of the NCC hostels built inside the premises of the Stadium. This apart, the government had also agreed to give Rs 60,000 rent charge every month till the completion of the quarters. However, no progress was made on this matter.

Based on the info, the Defence Secretary directed the officials of the concerned department to provide the land needed for the completion of the stadium. The meeting also decided to develop Airports in the coastal areas of the state and the Rasgovindpur Airstrip in Mayurbhanj district.

Secretaries, Officials of other departments along with some Air Force Officers attended the meeting.