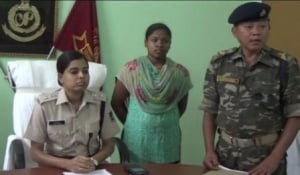 Kuni, a native of Telkoi, surrendered before the police in the presence of Deogarh SP Sarah Sharma.

Kuni joined the red rebels while she was studying in fourth standard and was active in the Kalinga Nagar Division of the outlawed CPI (Maoist) since 2010. The division, which covers Jajpur, Deogarh, Angul, Rourkela and Keonjhar, was then led by deceased Maoist leader Sushil.

Speaking to the reporters, Sharma said, “Kuni wished to leave the group and join the mainstream of society as she was being harassed both physically and mentally. She was involved in many Maoist activities including the attack on Daitari police station and exchange of fire in Tikarpara in Jajpur district.”

“When I was studying in fourth class and was too young to understand anything, the red rebels had a meeting in our village during which they forced me to join their group by giving me lucrative promise. I spent about ten years in the organisation, but did not get any money or assistance from them. Therefore, I left the group,” said Kuni.

Family members of the woman Maoist claimed that she had gone to surrender before the Keonjhar police two years ago. But Deogarh police kept her in confinement to extract information about other women Maoists of the Kalinga Nagar Division like Jaya, Jayanti and Rashmita who have already surrendered.  However, she was in touch with them during this period, they said.

They also demanded a probe into why the Deogarh police took Kuni from the Keonjhar police and kept her in confinement.