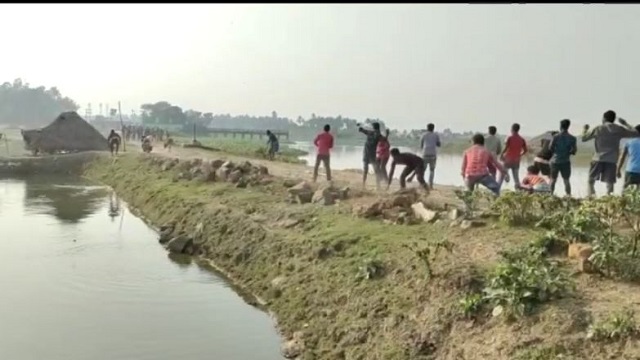 Paradip: Tension erupted in Dhinkia Panchayat near Paradip in Jagatsinghpur district of Odisha on Monday over demarcation of a village. The villagers and Police faced off after a village was said to have been omitted from the Panchayat during the demarcation process.

As per reports, the Patana Haata area in Paradip area turned violent as some locals of Dhinkia village allegedly barged into the Police camp.

It has been alleged that earlier Police had entered the village and thrashed some locals of the village over this matter. It has been reported that Police picked up 2 villagers for which tension erupted that turned violent soon.

The villagers and Police personnel allegedly pelted stones to each other at Patana Haata and Dhinkia area. By the time this report was written, tension gripped the area.

Update: As per latest updates, 2 persons have been arrested.

Reports say, JSW Utkal steel plant is facing local resistance in Dhinkia. JSW Utkal to set up a 12MTPA steel plant with an investment of Rs 50,000-cr in Jagatsinghpur district where the POSCO Steel plant was to come up. While the POSCO clearances have been transferred to JSW Utkal, but Dhinkia is restive again.

Jio vs Airtel vs Vi: Best 4G prepaid plans with validity of 28 days