Bhubaneswar: In a bid to clear the rush for driving licence, the Regional Transport Office (RTO), Bhubaneswar II has opened a camp office at BMC North office near Kalinga Hospital Square from today.

Regional Transport Officer, S.K Behera said that as many as five officials including one MVI have been deployed at the camp office. “The office will remain open between 10 am and 5 pm and so far we have issued around 100 learning licences so far,” said Behera. 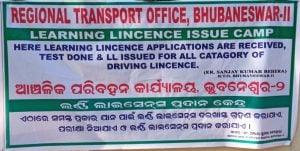 RTO officials said that the camp office will remain open till further order. “Most of the RTOs across the state have witnessed huge rush after implementation of the amended MV Act in Odisha from September 1. The camp office will ease the burden on the main office and help applicants to obtain a licence quickly,” said an official.