Odisha: Scorpio bursts into flames in the middle of the road, all passengers safe 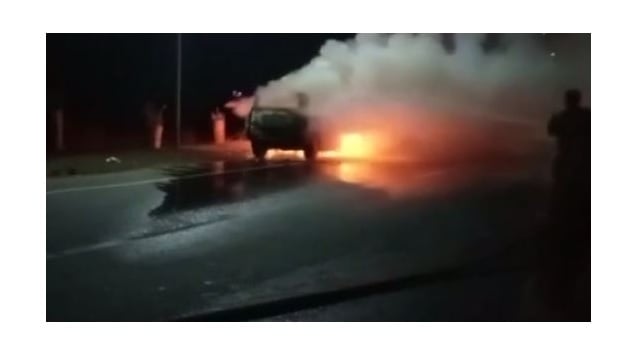 Boudh: A Scorpio burst into flames in the middle of the road on Boudh by-pass. The eight passengers in it had a close shave and escaped with their lives.

According to reports, the fire was caused due to a short circuit.

The passengers were traveling towards Nagpur from Muniguda. There were five female and three male passengers in the vehicle. The fire department is working to douse the fire.

According to reports, eight people from Nagpur area were returning from Muniguda area of Koraput after participating in some function. They detected the smell of something burning when they reached the by-pass near Boudh city. Upon getting this scent, the car was immediately stopped on the middle of the road and all the passengers got down from the vehicle as soon as possible. This timely intervention helped save the lives of the eight people.

However, it has been reported that all the belongings of the passengers in the car were burnt down.

Boudh fire department reached the place of incident and attempted to bring the fire under control along with nsuring the safety of all the passengers.

Gold prices continue to rise up in India on December 10

Madhya Pradesh: 8-year-old boy who was stuck in 55-foot-deep borewell for 4 days, dies