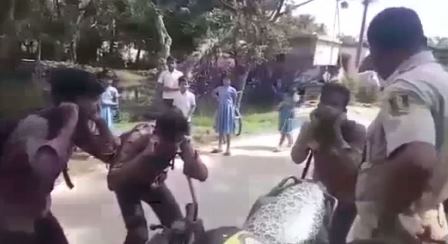 Balasore: Odisha police on Tuesday punished four students of a private college in Jamusoli of the district for calling a police constable ‘Mamu’.

‘Mamu’ (meaning uncle) is fondly used  to refer the police in many parts of India.

The four students were forced to do sit-ups by police constable Deepak Pradhan of Jamakunda police outpost as a punishment for calling him ‘Mamu’. Pradhan also allegedly beat the students.

According to reports, the four students were returning home after attending classes yesterday when Pradhan blew the horn of his bike on his way to Langaleswar. One of the students asked his friends to give way to the cop addressing him as ‘Mamu’.

Pradhan lost his cool after hearing the ‘Mamu’ word and made the students do ‘sit-up’. He also threatened the students to spoil their career.

Meanwhile, Balasore SP Niti Shekhar has assured to look into the matter and take action against the constable after a probe into the incident.