Naveen assures Anganwadi workers to look into their demands 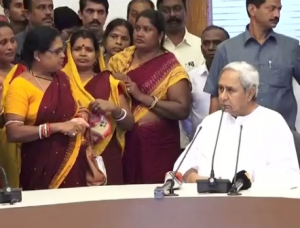 Bhubaneswar: Chief Minister Naveen Patnaik has assured the agitating Anganwadi workers that he would certainly look into their demands during a meeting at the Secretariat here today.

With the indefinite dharna of Anganwadi workers at the Lower PMG square entering into 36th day today, a group of workers met the Chief Minister at the Secretariat and submitted their 17 point charter of demand requesting him to consider their case on an urgent basis.

After hearing from the workers in a composed manner Naveen said, “I would surely look into your issues.”

Following the assurance from Navee,  the Anganwadi workers have expressed their happiness and hoped that their demands would now be met sooner than later.

“We are working at the grassroots-level for the development of children in terms of their health and pre-primary education. Similarly we are successfully carrying out various assignments pertaining to Mamata, BPL, and SHG schemes”, said a Anganwadi worker soon after the meeting. “We have taken it to the notice of CM and he has assured to look into our issues. We are hopeful for a positive outcome”, she added.

Earlier in the day, BJP Odisha unit held a press conference in the city and took a dig at the Odisha Government over making an inordinate delay in addressing the issues of Anganwadi workers.

The women wing of BJP also announced that its workers would meet Collectors of each districts across the state and convey the problems Anganwadi workers starting from tomorrow.