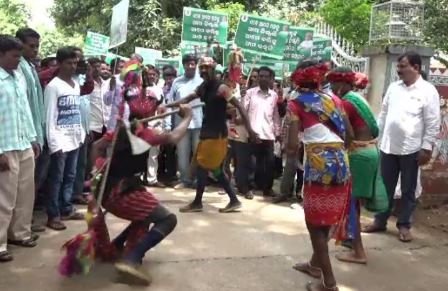 Bhubaneswar: Hundreds of tribals from Nabarangpur district on Sunday met Chief Minister Naveen Patnaik and thanked him for approving a proposal to set up the Tribal Special Development Councils in nine districts of the state.

Performing their traditional dance, the tribals marched in a rally from BJD party office to Patnaik’s residence Naveen Nivas under the leadership of Jharigaon MLA Ramesh Majhi and Umerkote MLA Subash Gond and met the CM.

“We came here to express our gratitude to honourable CM Naveen Patnaik for taking a historic decision to set up Tribal Special Development Councils in nine districts of the state. This will definitely help in all round development of the tribals in these nine districts, especially in the areas like education, health and communication,” said Umerkote MLA Gond.

The Odisha Cabinet on Thursday gave its nod to set up Tribal  Development Councils in nine districts of the states – Mayurbhanj, Keonjhar, Sundargarh, Kandhamal, Gajapati, Malkangiri, Rayagada, Koraput and Nabarangpur.

Patnaik had announced that the councils will have decision making powers and financial resources to preserve, promote and develop the unique socio-cultural identities and economic capacities of tribals in the state.

As per Naveen’s announcement, the state government has targeted to spend Rs 175.5 crore annually for the development of the tribals through these development councils. Each block in the nine districts will get an allocation of Rs 1.5 crore every year.

The state has 62 distinct scheduled tribes of which 13 are particularly vulnerable tribal groups (PVTGs).

Representatives of 62 tribal groups, who constitute 22% of the state’s population, will be the members of the development councils.