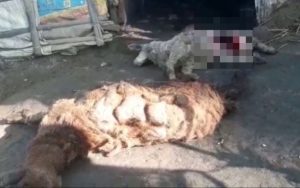 Cuttack: The mysterious killings of sheep have continued in Niali block in the district as three more sheep were found dead in Balikuda village this morning.

On Tuesday night, at least 14 sheep were attacked and killed in Adaspur and Nua Babaja villages in the region.

People in the Niali area have been in a state of panic as the unknown animals have started killing their sheep after a gap of nearly three months.

The killing spree of sheep by mysterious animals was first reported in June this year. Over 250 sheep were mysteriously killed in the Niali region during June and July.

Earlier, the government had deployed forest officials and wildlife experts from Dehradun to trace the predator, but couldn’t succeed.