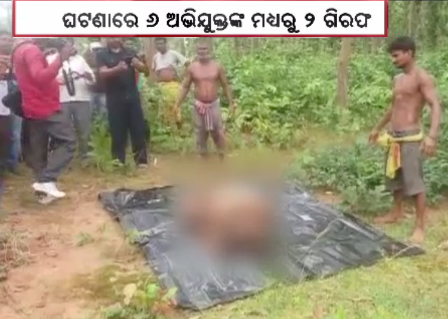 The arrested persons have been identified as Sheikh Raju and Ajay Patra.

Informing media persons about the arrests, Baripada SDPO Abhimanyu Nayak said Sudheer was killed for the Rs 90 lakh he had received by selling off a plot  of land.

Six persons were involved in the kidnapping and killing of Sudheer. The accused had information on the sale of the plot by the victim and hatched a conspiracy on September 25 to loot the money. As part of the plan, the accused took Sudheer on a Tata Nano car to the Betanati forest after kidnapping him from his home in Baripada and looting the money on the intervening night. Later, they killed him by strangulating him in the forest and buried the dead body, said Nayak.

Police came to know about the whole incident during interrogation of Sheikh Raju and Ajay Patra who were caught this morning.

Police have launched a search to arrest the other four accused.

Youth commits suicide by jumping in front of train