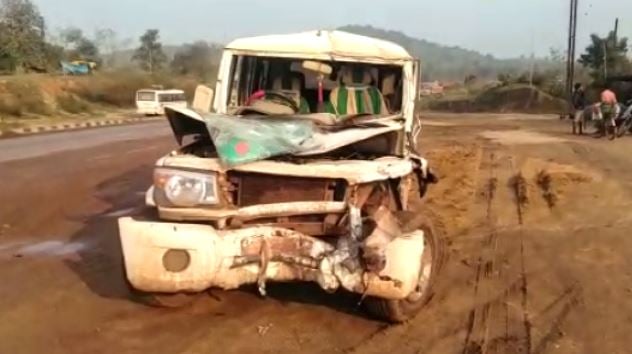 Anandpur: At least one person was killed and two others sustained critical injuries after a SUV hit a stationary vehicle at Kolimati Chhak under under Ghasipura police limits in Keonjhar on Thursday.

The deceased has been identified as Tutu Patra of Joda area.

As per the report, one Debasish Mahakud of Joda area hired a Bolero to Bhubaneswar to visit his mother who had been admitted to a hospital for surgery. He was en-route to Bhubaneswar when th driver failed to spot a stationary vehicle on NH-20 and hit it from behind.

As the Bolero got mangled completely in the crash Tutu died on the spot. Two other including Debasish and his nephew Bijay Mahakud sustained critical injuries. They were later shifted to Anandpur Sub Divisional Hospital for treatment by local police.

The other vehicle involved in the accident has escaped from the spot.