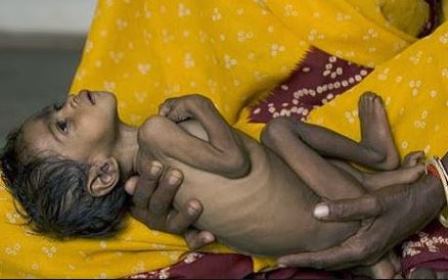 Community to manage malnutrition in all 30 dists Bhubaneswar:  In another step forward towards curbing malnutrition in the state, the government  has decided to extend the Community Management of Malnutrition Programme to all 30 districts of the State.

It was decided in the meeting that the programme, which had been successfully piloted in the districts of Kandhamal and Bolangir, would be implemented under the aegis of the department of Health & Family Welfare. Women & Child Development Department, UNICEF and Azim Premji Philanthropic Initiatives will be the partners in the programme.

“Massive awareness and mobilization activities would also be undertaken at village and community level,” he added.

The state government has prioritized IMR/MMR reduction strategies through a multi-pronged convergence model in which nutrition finds a prominent mention.

Around Rs.808.98 crores was earmarked towards supplementary nutrition programme in the Annual Programme Implementation Plan of ICDS for the year 2017-18.

Further, it was decided in the meeting that crèche and day care facilities would be revitalized in the State. As per preliminary data available, around 136 creche centers are presently functioning in the State. It has been proposed to set up 3629 AWC-cum-creche centers in the 1st phase during 2017-18

Initiating the process for ISSNIP (ICDS Strengthening and Nutrition Improvement Programme) in Odisha was also discussed in the meeting.  It was decided to pilot the programme in Khurda district during the current year.

The project would be a kind of ICT based monitoring of ICDS activities. For the purpose, an application software has been developed and shared with the Union government.

The director of Social Welfare said that under the programme, each Anganwadi Worker would be provided with a smart phone and each Supervisor would be given a tablet. They would upload the IMS forms through these devices.

Odisha No 1 in country in distributing land pattas under FRA