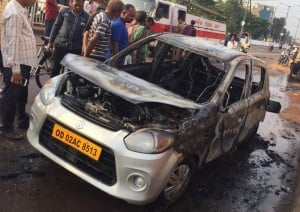 The car owner, Rabindra Nath Rout, who was on the wheels, had a narrow escape, but broke down to see his car burning. He was solaced by the cops as well as public.

The incident reportedly occurred due to a short circuit in wiring. A fire tender rushed to the spot to douse the fire.