After introduction of GST on Mach 31, 2017 this check post was abolished Baripada: When the unified check gate was in force at the Jamsolaghat in Mayurbhanj district of Odisha, thousands of vehicles were passing to West Bengal and Jharkhand through this check post. Back then, this place under Jharpokharia police limits was a busy location with hundreds of people working. Then, it had provided job to thousands of people.

However, this has become history now. After introduction of GST in 2017 the octroi check posts were abolished. Accordingly, the government properties at these places which worth crores are no longer coming to any use. And thus, in Jamsoala, gradually the place along with the buildings turned into a safe place for criminals.

Today the place has turned into a safe hide out for interstate criminals. Buildings that had been constructed with crores of money have not been used. Hence, the locals have demanded that if the government will start any other project here, the place again will be busy and criminal activity will be stopped. 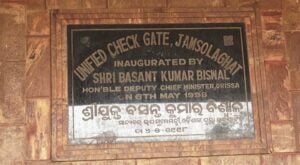 Situated in the Mayurbhanj district of Odisha Jamsola check post is in the boarder of West Bengal and Jharkhand. The check post is on the NH 49 that connects Kolkata and Mumbai. It comes under Jharpokharia Police limits.

The new building of this check post had been inaugurated by the then Deputy Chief Minister Basanta Biswal in 1998. The office and staff quarters of the unified check post had been constructedwith crores. Directly and indirectly thousands of people were earning from this gate. However, after GST was introduced on Mach 31, 2017 this check post was abolished. All offices of the commercial tax were closed. The staff abandoned the government quarters and went to other places. People who were earning from the gate lost their profession. And then it became a safe place for criminals.

Besides the big buildings, 34 numbers of 3 BHK staff quarters and five numbers of three storied barracks are there at the gate. However, all these buildings are of no use now. As per the locals merely two months before the post was abolished in 2017 the staff quarters had been constructed with more than Rs 2 crore. Tiles had been fixed in the houses. Yet, thieves took away all of these.

The intellectuals have opined that if the government will come up with any other project here, the government properties will be used and the place will again become busy and resultantly criminals will have to quit the place. Also, the new project will provide earning to the locals.

Displaced people from Mayurbhanj district have been resettled in other places. They are being provided land and houses. The buildings at Jamsola can be utilized for this purpose. Also, the Ekalavya School which was shifted to Saraskana block could be shifted here.  To get rid of the criminals the locals have established a temple in this area.

Asked about it, Mayurbhanj Collector refused to issue any statement in this matter. However, off record he said that steps will be taken soon in this regard. Once the forty acres of land surrounding the area will be transferred to the revenue department, any projects can be started here.

It has been questioned that after the octroi check posts at other places of the State were abandoned, different projects were started at the same place. In Balasore where once the Laxman Nath check post was working, later it was converted to Court. However, this is not the case with Jamsola gate.

These cars are likely to be discontinued in India from 2023, Know why