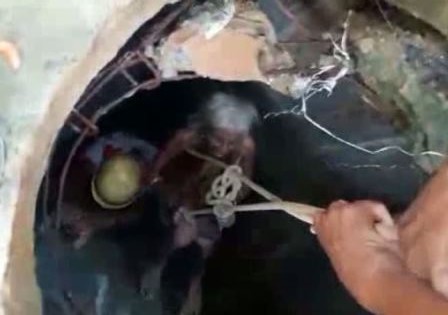 Bhubaneswar: In a shocking incident, an 80-year-old woman identified as Dukhi Jethi was rescued by a Fire Brigade Team 10 hours after falling into a 20-feet-deep manhole at Tarasundari road in Old Town area here on Friday.

The victim, who sustained injuries on her head, hands and legs, was admitted to Capital Hospital for treatment.

According to reports, the woman had to spend the entire night inside the deep manhole after she fell into it around 8 PM yesterday. She could not be rescued till this morning as nobody noticed her falling into the manhole.

Fire brigade personnel reached the spot and rescued the victim after getting information from some passersby, who heard the elderly woman’s screams from inside the manhole this morning.

Some locals vented their ire at BMC Mayor Ananta Narayan Jena saying he should take note of manholes across the capital city and ensure their proper closure.