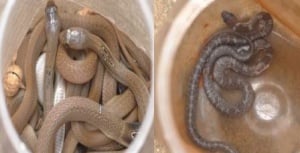 Jajpur: As many as 22 cobras and two banded kraits were rescued from a house in Borei village under Panikoili police limits in Jajpur district on Wednesday.

The snakes were rescued by the members of the snake helpline by digging the verandah of an elderly woman identified as Usharani Das.

Usharani’s daughter Anupama Panda, who had come to the house, first noticed a small cobra and informed the snake helpline.

The snake helpline team rescued the snakes with the help of the villagers and forest officials by digging the verandah. However, three snakes died while being rescued as soil fell over them.

Usharani demolished the entire house out of fear after the incident.  The house was situated away from the village.

A huge crowd gathered in the village to see the snakes.

The snakes will be left either in the nearby forest or sent to Nandankanan Zoological Park in Bhubaneswar.