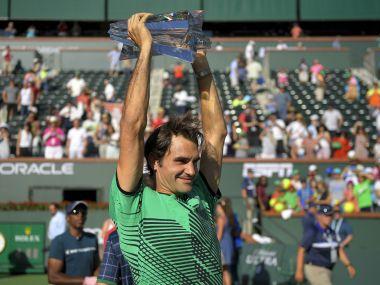 Roger Federer celebrates with the trophy after his win over Stan Wawrinka in the final. AP

At 35, Federer is the oldest ATP player to win one of the elite Masters titles, supplanting Andre Agassi who was 34 when he won in Cincinnati in 2004.

“It’s been just a fairytale week once again,” said Federer, who missed Indian Wells last year because of injury.

“I’m not as surprised as I was in Australia, but still this comes as a big, big surprise to me, nevertheless, to win here again and beating the players that I did and the way I did.

“I couldn’t be more happy. It’s an absolute, huge start to the year for me. Last year I didn’t win any titles. I don’t think I was in any finals except maybe Brisbane last year. The change is dramatic, and it feels great.”

The speedy progress means 10th-ranked Federer will have to reassess his 2017 goals. Prior to the Australian Open his aim was to get his ranking to as high as eighth by the time Wimbledon was over.

“The goals are clearly changing after this dream start,” Federer said.

While Federer had won 19 of 22 prior meetings with Wawrinka — including a semi-final win in Melbourne — he noted that his compatriot would be no easy mark as he played his first tournament in America since winning the US Open in September.

But Federer claimed a tightly contested first set with a break in the 10th game, pushing Wawrinka into a forehand error to end a tense rally for a set point, on which Wawrinka sent another forehand long.

Wawrinka responded immediately with a break to open the first set — after Federer had held all 42 of his service games in the tournament to that point.

He had saved the lone break point he faced — in his straight-sets thumping of Rafael Nadal in the fourth round — but sent a backhand long on break point to give Wawrinka the advantage in the set.

Wawrinka then withstood two break points to hold for a 2-0 lead, which proved short-lived as Federer won the next three games to take a 3-2 lead.