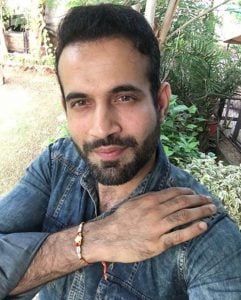 Vadodara: Indian cricketer Irfan Pathan is once again being trolled after he wished his fans on the occasion of Raksha Bandhan on Monday.

The cricketer took to Instagram to post a photograph of him wearing a rakhi around his wrist. “Happy Rakhi everyone #rakshabandhan,” Pathan captioned the image.

Soon after Pathan posted the picture, trolls lashed out at him for celebrating a Hindu festival. The Vadodara all-rounder was told that wearing rakhi was not acceptable as per Islamic traditions.

Some of Comments on Pathan’s post are as follows.

Be a Muslim bro..ur father did not tell u about Bida’t.u should know.

its a disgracefull for a true muslim…..Whoever does this is wrong.

However, Pathan hit back at trolls by posting a strong comment.

“Using foul language. Talking each other rudely on basis of religion. It shows nothing but ur own learning which some ppl have gathered in their mind over the years.stop this nonsense of putting each other down,” Pathan commented.

Last month, Pathan became the target of religious fanatics after he posted a picture of his wife, in which her arms were visible and she was wearing nail polish.