My career started from Bhubaneswar 10 years ago: Sudha Singh 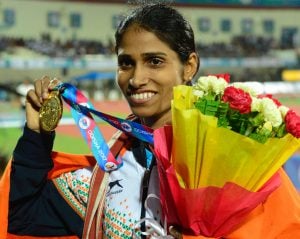 Bhubaneswar: In 2007, a young Sudha Singh, 21 years then, had attended her first Steeplechase training camp with the Railways in Bhubaneswar. Ten years later, she is back in the city as a champion. Sudha is not only taking back sweet memories, but also carrying a gold medal back from the city that gave impetus to her career.

“Bhubaneswar is very lucky for me. This is where it all started and winning a gold here is the best thing that I could have ever asked for. Ten years later, I come to the city and I am carrying back a gold,” said an ecstatic Sudha after clinching her first gold in Asian Athletics (3000 meters Steeplechase). She had earlier won two silver medals in the championships.

Sudha, who had remained national record holder for seven consecutive years, before her compatriot Lalita Babar broke it in the Rio Olympics qualifier, said timing was not her concern here.

“My aim here was not to beat the record timing. I have saved it for the World Championships. Here, I just wanted to win a gold and eventually I did,” Sudha said.

“The track is very fast. I started at my own pace and thought at one point that the race was going very slow. But once confident, I thought of running fast and winning quickly,” she said with a smile.

Praising the facilities in Bhubaneswar, she said, “After Commonwealth Games, I feel this ihas been the best organised sports event. Right from facilities to volunteers to stadium, everything is just perfect,” she said.