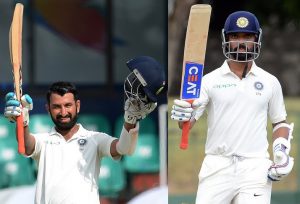 Colombo: Riding on the excellent performance by middle order batsmen Cheteshwar Pujara and Ajinkya Rahane, India reached 344/3 against Sri Lanka on the first day of the second Test at the Sinhalese Sports Club here.

Pujara and Rahane remained unbeaten on 128 and 103 respectively.

With his second successive century in the series, Pujara also completed 4000 Test runs. The Shaurashtra batsman became the seventh Indian player and 36th overall to score a hundred in his 50th Test appearance.

Earlier, India had won the toss and opted to bat. Lokesh Rahul, who replaced Abhinav Mukund, made 57 on his return to the playing eleven after injury. Shikhar Dhawan (35) and Skipper Virat Kohli (13) were the other wickets that fell today.

For Sri Lanka, Rangana Herath and Dilruwan Perera shared one wicket each.

Team India is leading the 3-match series 1-0. They had won the first Test at Galle last week by 304 runs.