Republic Day: Majority of the tableaux based on Women Empowerment 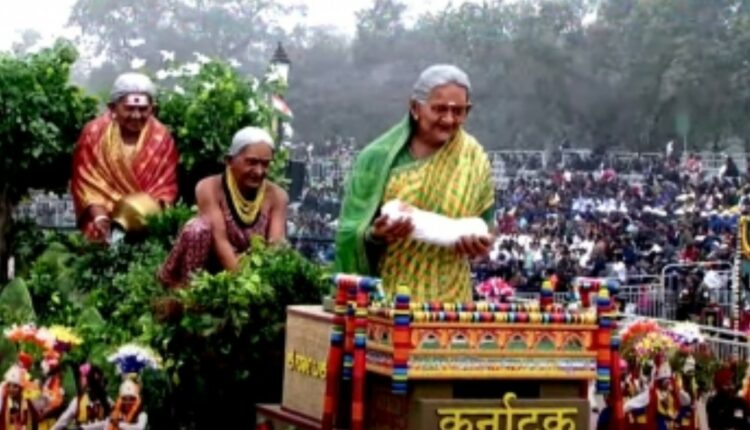 New Delhi: Most of the tableaux that rolled down the Kartavya path on the occasion of the 74th Republic Day parade on Thursday were centred around ‘women empowerment’.

Around 479 artists, who were selected through Vande Bharatam dance competition organised across the country, added color to the Republic Day parade with their performances. The theme of the cultural programme was ‘Nari Shakti’ performed by 326 women dancers, supported by 153 men dancers in the age group of 17 to 30 years.

They were seen performing a fusion dance of classical, folk and contemporary depicting the ‘power of women’ through the five elements earth, water, air, space and fire. This is the second time that the dancers for the cultural program have been selected through a nationwide competition.

Andhra Pradesh tableau presented Prabhala Theertham – the festival of farmers during Makar Sankranti. Kerala presents the tableau of aNar i Shakti’ and folk traditions of women empowerment. The tractor portrays Karthyayani Amma, the winner of Nari Shakti Puraskar in 2020 who top scored the literacy examination at the age of 96

The Jammu & Kashmir tableau with its theme ‘Naya J&K’ showcased the holy Amarnath Shrine and Tulip gardens and lavender cultivation.

The Ladakh tableau was based on the tourism and overall culture there. In the tableau of Uttarakhand, the temple of Jageshwar Dham located near Almora, Garhwal, Kumaon and Manaskhand were presented.

The tableau of Tripura showcased sustainable livelihood through tourism and organic farming in Tripura with active participation of women.

The main attraction of Jharkhand’s tableau was the glimpse of Baba Baidyanath Dham. A glimpse of women empowerment was also seen in the tableau of Tamil Nadu, along with this the culture of Tamil Nadu has also been shown in it.

The tableau of Karnataka also presented Nari Shakti Mahotsav. In the tableau of Uttar Pradesh, the festival of lights and the record of lighting lakhs of lamps together was displayed. This tableau was based on the Ayodhya Deepotsav.

The tableau of the Ministry of Agriculture and Farmers Welfare showcased the International Year of Millets 2023 and India’s initiative on it. This tableau depicts the importance of millets like millet, jowar and ragi.

The Central Public Works Department tried to explain biodiversity conservation in its tableau.

Shweta Tiwari and Vikaas Kalantri grooves to the hit song of Pathaan: Watch