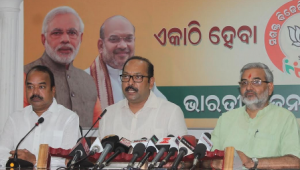 Bhubaneswar: Odisha BJP on Wednesday alleged that the state government is running not on the three Ts of Team Work, Transparency and Technology that Chief Minister Naveen Patnaik urged his ministers to follow recently, but on the fourth T, which stands for ‘Tricks’.

Addressing a press conference at the party office here,Bhrugu Buxipatra, general secretary of the state unit of BJP, alleged that the state government is functioning by using trickery to hijack many central schemes.

“Though pucca house have been sanctioned to the people under Pradhan Mantri Awas Yojana, the state has instructed the beneficiaries to mention ‘Biju Pucca Ghara Yojana’ in the plaque. They have been told that the final settlement of bill will not be done if they fail to do so,” he claimed.

“The BJD government has constructed 3 lakh houses in the last three years, but has claimed that 10 lakh houses have been built,” he added.

Buxipatra also took the state government to task for failing to provide drinking water to the people in rural areas, where women are staging demonstration over the acute shortage of water in their locality.