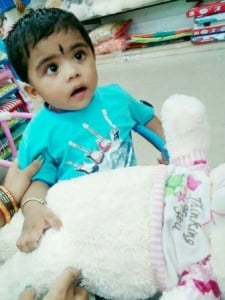 Cuttack: At three, Ayush Mohanty of Nuapatna village under Tigiria Tehsil in Cuttack district, should have been running all over the place. Instead, it is his parents who are doing all the running, carrying him on their lap in search of financial support to cure him of the mystery disease he is suffering from for the last one and half years.

Ayush’s father Bibhuti Mohanty has already spent Rs 4.5 lakh, which he managed to arrange by selling off his house and the little land he owned.

Initially, Mohanty took his son to NIRTAR at Olatpur, where doctors said one of the veins in the minor’s head has got twisted and referred him to SCB Medical College and Hospital in Cuttack, saying it is beyond their capacity to cure him.

Later, the family members took Ayush to different government-run hospitals, including SCB and Sishu Bhawan, where doctors said his treatment is impossible in Odisha as there are no modern machines meant for the treatment of the sickness. Many doctors suggested them to take him to Bangalore.

Bibhuti had to move to different places seeking financial support from many officials and individuals. While he is yet to get a reply from anyone, he received another jot when he was removed from the small job he was doing at an Aahar centre. The officials of the centre sacked him from his job complaining that he was irregular.

Fearing the death of the child if not treated at the possible earliest, locals have urged the state government and district administration to bear the medical expenses of the minor.

Any volunteer or organization wishing to support Ayush financially can do so through the details in the below.