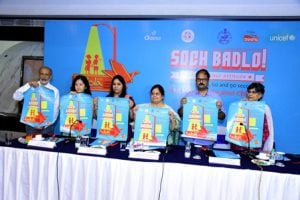 This year, the contest had invited entries for short films (30, 60 and 90 seconds) on the theme ‘End violence against children …SOCH BADLO.’ The best five films will be awarded. The contest is open to everyone – professional filmmakers, film students, amateurs or anyone with a good idea and filmmaking skills. Interested participants can log onto www.aaina.org.in/kallola for information on the contest, themes, rules and the entry form. The last date of receiving entries is October 5, 2017.

As part of the non-competitive section of the contest, select children from Utkal Bal Ashrams, under the Odisha State Child Protection Society, Govt. of Odisha, will be trained and encouraged to express their views through short films ranging from 60 to 90 seconds.

Speaking at the launch event, Yumi Bae said, “Kallola offers an opportunity for individuals, government and organizations concerned about child rights to come together. We know that to bring any change, the Soch Badlo or change your attitude message towards any violation of children’s rights has to reach and be understood by all strata of people. We are very pleased that this year we have a range of partnerships that not only expand the participation and views expressed but also help reach the widest audience with this message.”

Speaking at the function, Sneha Mishra, Secretary, Aaina said, “We are looking forward to the third edition of Kallola with a hope to receive more films focusing on the issue of ending violence against children that provokes people to look at the issue from a different perspective and take action to end the violence.”

Ranjan Satpathy, creative head, OTV Network, said, “OTV Network is pleased to partner this initiative. We will telecast the award winning films as well as conduct interactive media programmes with filmmakers on this theme.”

Kasturi Mohapatra, Chairperson, Odisha State Commission for Protection of Child Rights said, “Let’s commit to stop all forms of violence against children. Nothing is harder than to change the attitude of people on this issue. While we know a lot of work is needed, generating awareness through short films will contribute to making Odisha a safe and secure place for all children.”

Notably, Kallola, an annual short film contest on child rights, was launched by UNICEF Odisha in partnership with Aaina, a state-based NGO in 2015. The themes covered in the two seasons are Ending Violence against Children and Ending Discrimination against Girls. All films are in the category of Public Service Advertisements – 30, 60 or 90 seconds and are made pro bono by the filmmakers.  Best five films are awarded annually. Till date, 55 filmmakers have participated and 11 films awarded. A non-competitive section was introduced in 2016 for participation of adolescent children. The short films are conceptualized, scripted and directed by the children themselves in this category.