Plane with 72 people onboard crashes in Nepal Airport, 42 dead

At least 30 people died when a passenger plane crashed in Pokhara region of Nepal's Kaski district on Sunday. 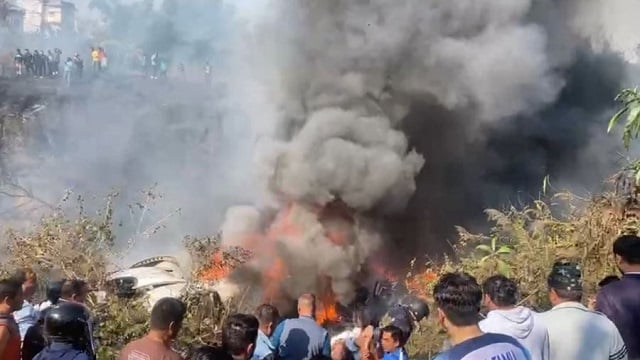 Kathmandu: At least 42 people died when a passenger plane crashed in Pokhara region of Nepal’s Kaski district on Sunday.

Chief District Officer Tek Bahadur K.C. confirmed that bodies of 42 passengers have been recovered so far.

The 72 seater passenger aircraft, reportedly crashed on the runway at Pokhara airport in Nepal while landing.

“Chances of finding people alive are less, Sudarshan Bartaula spokesperson of Yeti Airlines said, adding that “we are pulling out the bodies.”

A total of 68 passengers and four crew members were on board the aircraft that crashed between the old airport and the Pokhara International Airport, Sudarshan Bartaula, spokesperson of Yeti Airlines, said.

#WATCH | A passenger aircraft crashed at Pokhara International Airport in Nepal today. 68 passengers and four crew members were onboard at the time of crash. Details awaited. pic.twitter.com/DBDbTtTxNc

The ill-fated aircraft was proceeding towards Pokhara from Kathmandu.