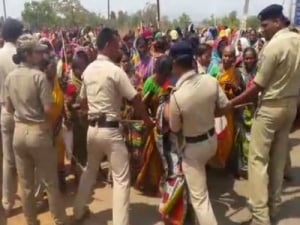 The Kamakhyanagar police lathicharged a group of women while trying to prevent them from demolishing a country liquor manufacturing unit at Bhalumunda village in Dhenkanal district on Wednesday.

Alleging that their husbands consume liquor from the government-run liquor unit and fight with them every day, hundreds of women from the area tried to vandalize the wine unit, however, they had a face-off with the police as the latter waylaid them on their way to the wine unit.

Angered by the police action, the protesting women pelted stones at the cops. Later, police had to resort to a minor lathicharge to disperse the them from the site and maintain law and order.