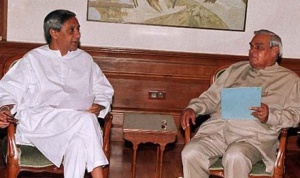 In a significant development, which is enough to raise eyebrows in the political circle and trigger a series of fresh debates, Odisha CM Naveen Patnaik met former PM Atal Bihari Vajpayee at his 6A Krishna Menon Marg in New Delhi this evening. After meeting the former PM, Naveen Patnaik termed it as a ‘courtesy call’.

The meeting took place at around 6 PM. It can be recalled that Naveen always considered Vajpayee as his political mentor. He started his political career as a Union Minister in Vajpayee’s Cabinet in 1998-2000.

His party BJD had 9-year alliance with BJP at the State before they parted ways in 2009. It is not immediately known why Naveen decided to meet the ailing Vajpayee and what message he wanted to send.