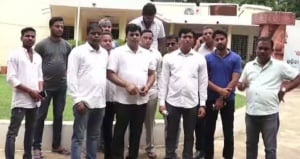 Bhubaneswar: The youth and students’ wing of the ruling BJD on Friday announced that they would hold demonstrations at all district headquarters of the state on June 19 to protest against the recent controversial remarks of Union Minister VK Singh and Chhattisgarh Minister Amar Agrawal on the issues of special category status (SCS) to Odisha and Mahanadi river dispute respectively.

It is to be noted that during his recent visit to the state, VK Singh had recently rejected the longstanding demand for special category status to Odisha.

“Special category of Odisha is not necessary. The tag of special status has now become irrelevant under the changed situation as the states are now getting substantial financial assistance from the Centre for undertaking developmental activities”, Singh said on June 13 during his visit to Odisha.

On Wednesday, Chhattisgarh Commercial Tax and Industry Minister Amar Agrawal had revealed that his government is getting funds from industrial units to construct barrages on the upper catchment of river Mahanadi with to provide them adequate water for 15 years.

BJD’s youth and student wings are not leaving any stone unturned to reach out to people across the state on the twin issues of special category status for Odisha and Mahanadi river dispute, hoping to strike a chord with them,